TELL CONGRESS THERE IS NO TIME LIMIT ON EQUALITY 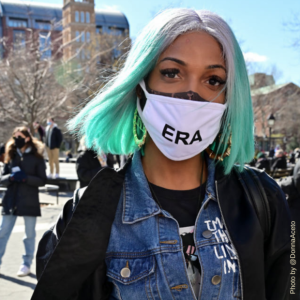 The proposed Equal Rights Amendment states in part: “Equality of rights under the law shall not be denied or abridged by the United States or by any state on account of sex.”

But what about the Equal Protection Clause of the 14th Amendment? “No State shall make or enforce any law which shall abridge the privileges or immunities of citizens of the United States; nor shall any State deprive any person of life, liberty, or property, without due process of law; nor deny to any person within its jurisdiction the equal protection of the laws.”

DOESN’T APPLY TO WOMEN. YEP. ONLY MEN ARE GUARANTEED EQUAL TREATMENT UNDER THE CONSTITUTION.

And because of this, women and a few allies fought to introduce the Equal Rights Amendment to Congress in 1923. 49 years later in 1972, It was passed by both chambers of Congress with bi-partisan support.

State Legislatures then had 7 years to ratify it (a deadline that was completely arbitrary), but despite a deadline extension to 1982, only 35 states had ratified it, missing the 38 state threshold.

WHY IS THE ERA NECESSARY, IN LIGHT OF THE CONSTITUTION’S EQUAL PROTECTION CLAUSE?

The 14th Amendment says that the government may not “deny to any person within its jurisdiction the equal protection of the laws.” The Supreme Court has held that this provision gives some protection against sex discrimination, but it doesn’t apply to sex in the same way it applies to race or national origin because it is argued (and probably true) that the framers of the 14th Amendment did not have sex equality in mind.

Some U.S. Supreme Court Justices, including the late Justice Scalia, rationalize that because they believe the Framers didn’t intend to include women, then it simply doesn’t protect them. As a result, if the Court moves to the right with more Justices who also believe the same thing, then decisions that say the 14th Amendment provides some protection against sex discrimination could be rolled back.

Ratification of the ERA would confirm once and for all, that equal rights is a core value in our Constitution, finally providing an explicit guarantee of protection against discrimination on the basis of sex, and it woudld end the patchwork of protections that curretly exist at the federal, state, and local levels.

HOW WILL AN EQUAL RIGHTS AMENDMENT SUPPORT WOMEN OF COLOR?

An Equal Rights Amendment will serve to protect our achievements and enshrine equal rights as a core value in the Constitution, which means true equal protection under the law will be significant for women of color.

ISN’T THIS ALL ABOUT CHANGING THE LAW ON ABORTION?

This is a typical bait and switch attempt and the topic isn’t even related. The Supreme Court has already held that the Constitution protects the right to abortion, even without the ERA. The ERA would enhance equality across a variety of areas, which includes protection from discrimination based on pregnancy, childbirth, and motherhood.